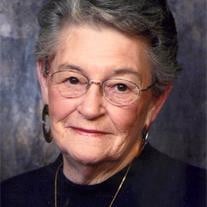 Shirley passed away April 11, 2009 at Tabatha Hospice Care Center, Lincoln, Nebraska after courageously battling non-Hodgkin?s lymphoma for a third time in 9 years. A Memorial Service will be held April 18, 2009 at 2:00 p.m.at the Methodist Church, in Crawford, NE with burial of ashes at the Crawford Cemetery. Shirley was born February 7, 1927 at Auburn, NE to Alba and Ida (Farnsworth) Mobley. At a young age the family moved to Crawford where Shirley attended grade school and graduated from Crawford High School 1944. After graduation she went to CA and worked in Hollywood Studios, became homesick and returned to meet and marry Jess Wasserburger May 23, 1948. To this union 3 children were born, Richard (Jake), Kim, Susan. Shirley was a ranch wife and mother only to pull up stakes and move to town in 1966. At this time she became a dental assistant for several years before becoming Crawford?s first water commissioner which she held until life changes in 1981. She moved to Lincoln as an ATO (Alpha Tau Omega) House Mother. Her housemother job touched many young men?s lives for 28 years. Mom thoroughly enjoyed following all of her children?s and grandchildren?s and ATO boy?s school activities and sports and guiding them through life--a job she did so well. Shirley was an active bowler, golfer, and loved to travel ? Germany, Canada, Hawaii, Alabama and Arizona and lastly Alaska. She surely enjoyed visiting with family and friends and the ATO Alums that would stop in and see her before and after Husker Games. ?Mom? as she was known by her ATO Family and on her license plate, rarely went anywhere that she didn?t run into some one she knew. Shirley is survived by her children, Richard (Jake) and wife Debbie of Huntsville, AL, Kim and husband Dale McCroden of Crawford, Susan and husband Robert Sedlacek of Omaha. Grandchildren Christy and Keith Miner, Jesse and Martha Wasserburger all of Huntsville, AL, Mike McCroden of Omaha, NE, Matt McCroden of Rapid City, SD, Beth and Jared Schultz of Great Falls, MT, Ben, Alex and Nick Sedlacek of Omaha, NE . 5 great grandchildren, sister-in-law Betty Mobley of Springfield, MO, and many nieces and nephews. Special friend Jo Bomberger, and Greek Organization House Mothers. Special nieces Shirley & LaVerne Stetson of Lincoln, NE, and Sherry & Ray Grijalva of AZ who have all been with Mom through these battles with cancer. Not to forget the Men of ATO who were with her through thick and thin. She is preceded in death by her parents, sister and brother-in-law Jean and Clyde Barnum, brother, Lloyd Mobley and Friend, Jess Wasserburger. Memorials have been established to Cedars Children?s Home, 620N 48th St Lincoln, NE 68504 Attn: Ruth McKinstry and NE Children?s Home Society, Omaha, NE.

The family of Shirley Mobley Wasserburger created this Life Tributes page to make it easy to share your memories.