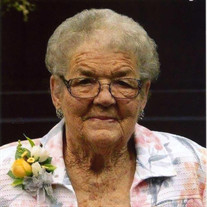 Shirley Ann Wilberger, daughter of Robert and Alma (Harms) Shanks, was born February 7, 1926, at Bayard, Nebraska. Shirley began her schooling at Bayard, and then attended school at Auburn, Nebraska after her family moved when she was in the 5th grade. Shirley graduated from Auburn High School in 1943, and then attended Lincoln School of Commerce. On May 6, 1945, Shirley was united in marriage to Harry J. Wilberger at Auburn. The couple would be blessed with two daughters, Nancy and Deborah. Shirley and Harry made their home on a farm near Julian, where they farmed together until retiring to Auburn. Besides farming alongside Harry, Shirley also worked at Master’s Implement and then American Meter in Nebraska City. Shirley was a member of Faith Lutheran Church at Talmage. She enjoyed gardening and flowers, and the many motorcycle trips with Harry on their Honda Gold Wings through the years. Shirley also loved sewing and knitting and was well-known for her baking. Her grandkids held a special place in her heart, and then her great- and great-great-grandchildren. On February 27, 2022, Shirley passed away at Good Samaritan Society-Auburn, having reached the age of 96 years and 20 days. She was preceded in death by her parents; husband Harry; grandsons Matthew Humphrey and Ryan Gadeken; great-great-grandson Elliott Cullison; brothers and sister-in-law Robert and Jeanne Shanks, Dale Shanks; sister and brother-in-law Betty and Charles Collins; sisters- and brothers-in-law Ruth and Rocco Manganelli, Helen and Albert Schacht. Those left to remember her caring ways include her daughters and sons-in-law Nancy and Larry Humphrey of Beatrice, Deborah and Ray Gadeken of Neligh; grandchildren Chuck (Rochelle) Humphrey of Beatrice, Heather (Gary) Cullison of Beatrice, Staci (Jeremy) Martensen of Neligh; great-grandchildren Matisyn (Cody) Welsch; Makenzi, Myranda, Billy, and Eli Humphrey, Eric (Courtney), Dalton, and Dylan Cullison; Riley, Tanner, Macoy & Sage Martensen; great-great-grandchildren McKinley and Aspen Cullison, Quincy Welsch; other relatives and friends. A funeral service will be Friday, March 4, 2022, 11:00 a.m. at Hemmingsen Funeral Home in Auburn. Family will greet friends one hour prior to service. Burial will take place in Camp Creek Cemetery near Nebraska City. Visitation will be on Thursday at the funeral home from noon to 6:00 p.m. View Shirley's funeral service via Livestream at: https://livestream.com/accounts/13846112/events/10217477 Memorials are suggested to Camp Creek Cemetery or family choice.

Shirley Ann Wilberger, daughter of Robert and Alma (Harms) Shanks, was born February 7, 1926, at Bayard, Nebraska. Shirley began her schooling at Bayard, and then attended school at Auburn, Nebraska after her family moved when she was in... View Obituary & Service Information

The family of Shirley A. Wilberger created this Life Tributes page to make it easy to share your memories.

Send flowers to the Wilberger family.