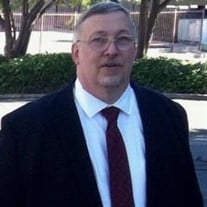 Stanley Edward Domikaits, III was born July 5, 1958 in Chicago, Illinois. He was one of three children of Stanley Edward, Jr. and Rhoda (Hellmer) Domikaitis. Stanley grew up and attended school in Chicago, graduating from Luther South High School. After high school, Stan received an appointment to the United States Military Academy at West Point, New York and graduated with the class of 1980. He then served in the active duty Army for 12 years before being honorably discharged at the rank of Captain. As his family and friends will attest, Stan remained proud of his military service all his life. In 1984, Stan was united in marriage to Ramona Mullins in Wichita Falls, Texas. Together they raised two sons: Jeremy and Brent. Stan’s work brought him to Auburn, Nebraska, where he worked as a Code Program Engineering Supervisor at the Cooper Nuclear Station at Brownville. At Cooper, he was known as “Stan the Man” because of his knack for finding solutions to complex problems where others could not. Stan would have celebrated his 20-year anniversary with the Nebraska Public Power District on September 21, 2018. In his spare time, Stan loved to read, reading entire books in a day or two. Video games were another love of Stan’s, World of Warcraft being a favorite. He was an excellent cook, and his passion for cooking led to his partnership in the opening of Boondocks, a local restaurant and bar. Stan also enjoyed the occasional karaoke, and all professional sports teams of Chicago, with the exception of the Chicago Cubs. After a hard-fought battle with cancer, Stan passed away at his home in Auburn, on Friday, August 31, 2018, having reached the age of 60 years, 1 month, and 26 days. His mother Rhoda preceded him in death. Those left to mourn Stan’s passing are his wife Ramona Mullins-Domikaitis; sons and daughter-in-law Brent Domikaitis, Jeremy and Sena McKissack; grandchildren Benjamin and Blake Domikaitis, Aiden McKissack; father Stanley Domikaitis, Jr.; sisters Donna Matthews, Diane Rach; niece and nephews Danise Matthews Weber, Daniel Domikaitis, Joshua Rach; other relatives and friends. “And when the battle stopped, And the smoke cleared. There was thunder from the throne. And seven Spanish angels, took another angel home.”

The family of Stanley "Stan" Edward Domikaitis III created this Life Tributes page to make it easy to share your memories.

Send flowers to the Domikaitis family.