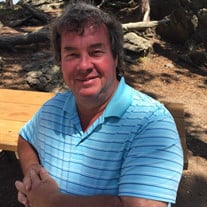 Steven Gregg Clark, one of four children of William and Marilyn (Dunker) Clark, was born September 30, 1962, in Tecumseh, Nebraska. Steve attended Johnson-Brock Public Schools, graduating from high school in 1980. He went on to the University of Nebraska-Lincoln, graduating with a degree in Mechanical Engineering in 1984. Steve entered the United States Navy on October 1, 1984 in Arlington, Virginia. He attended Officer’s Training School in Newport, Rhode Island. After graduation from OTS, Steve served in Orlando, FL, Idaho Falls, ID, Bremerton, WA, Groton, CT, San Diego, CA, and Salt Lake City, UT and onboard the submarine USS Drum during his almost 10 years of service to his country. After his honorable discharge as a Lieutenant on March 31, 1994, he returned to Johnson. On November 22, 1999 Steve was united in marriage to Jelayne Teten by Pastor Carolyn Waters at Centenary United Methodist Church in Beatrice. They were blessed with four children, Benjamin, Sophie, Maggie and Natalie. Steve worked at the family-owned Clark Grain Company during high school and upon his return from the Navy. He was active in the Johnson Chamber of Commerce, on the Johnson Volunteer Department, and served on the Johnson-Brock Schools Board of Education. He was a member of the Johnson United Methodist Church and a 4-H Leader with the Johnsonites 4-H Club. Loving the outdoors, Steve enjoyed fishing and traveling with his family. He also enjoyed rocketry and building his own rockets. Steve served as general contractor on the family’s new home in Johnson. On Friday, July 28, 2017, Steve was rushed to the Johnson Community Hospital in Tecumseh, Nebraska. He passed away there that evening at the age of 54 years, 9 months, and 28 days. He was preceded in death by his grandparents William Lee and Esther (McKee) Clark, and Conrad and Eunice (Ludden) Dunker; and by aunts and uncles Virginia and James Amen, Annis and Val Kemper, Joe Prazak, and Marjorie and Allen Clark. In addition to his wife and children, those who will always feel Steve’s loving presence include his parents Bill and Marilyn Clark of Johnson; sisters Diane (Dwaine) Sohnholz of Omaha; Carol (Mike) Morrow of Malcolm; brother Brian (Rhonda) Clark of Johnson; parents-in-law Reinhold and Mary Teten of Talmage; brothers-in-law Tim (Melody) Teten of Johnson; Tom (special friend Sandy Jensen) Teten of Brock; aunts and uncle Lyle and Helen Dunker; Dorothy Prazak; nieces and nephews Adam Morrow, Amanda (Chance) Martinez, Craig Teten, Stephanie Teten, Samantha Teten; other relatives and many friends. A memorial service will be Wednesday, August 2, 11:00 a.m. at the Methodist Church in Johnson. Visitation will be Tuesday from 9:00 a.m. to 4:00 p.m. at the funeral home, 303 Chestnut Street, in Johnson. Family will greet friends 6:00 p.m. to 7:30 p.m. at the Methodist Church in Johnson. In lieu of flowers, memorials are suggested to the Johnson-Brock Schools Foundation for a scholarship in Steve’s memory, or Nemaha County Friends of 4-H. Services are entrusted to Hemmingsen Funeral Home of Johnson.

Steven Gregg Clark, one of four children of William and Marilyn (Dunker) Clark, was born September 30, 1962, in Tecumseh, Nebraska. Steve attended Johnson-Brock Public Schools, graduating from high school in 1980. He went on to the University... View Obituary & Service Information

The family of Steven G. Clark created this Life Tributes page to make it easy to share your memories.

Steven Gregg Clark, one of four children of William and Marilyn...

Send flowers to the Clark family.