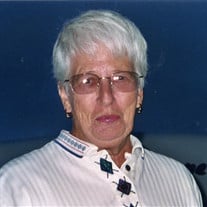 Charlotte Sue (McVey) Justus was born February 16, 1934 in Chillicothe, Missouri. One of three children of Ross N. and Nina E. (Malone) McVey, Sue attended school in Chillicothe and graduated from high school there. She then attended Chillicothe Business College. After college, Sue began working with the Rural Electric Association in Chillicothe. While working there she met Charles Justus, and they were married on March 22, 1958 in Chillicothe. They would be blessed with two children, Steve and Carla. The couple’s first home was in Fairbury, Nebraska, but before long they moved to Beatrice, and on August 10, 1973 the family moved to Auburn, Nebraska. While in Beatrice, Sue worked at the J.C. Penney store in town. After moving to Auburn, and a short stint at Cooper Nuclear Station in Brownville, Sue went to work in the optometry office of Dr. Pat Crotty, where she stayed from 1976 until retiring in 1991. Sue enjoyed camping and travelling with family, and she and Charles spent several winters in Arizona after retiring. When a sudden illness resulted in her being admitted to Bryan East Medical Center in Lincoln, Sue spent several days in the hospital. On Wednesday, July 27, 2016, Sue passed away at Bryan East with family around her. She had reached the age of 82 years, 9 months, and 11 days, and was preceded in death by her parents, brother Gene, and daughter-in-law Leslie. Sue is survived by her husband Charles of Auburn; son and daughter-in-law Steve and Candi of Auburn; daughter and son-in-law Carla and Kurt Frye of Hickman; grandchildren and spouses Vanessa May, Blake and Meredith Justus, Jessica and Gary Nerison, Jarrod and Amanda Justus, Ethan Justus, Misty and Robert Girkin, Ryan Dawe, Nicole and Kacey Shane, and Nathan Frye; 9 great-grandchildren; sister Laura Conway of Sarasota, FL; nieces, nephews, other relatives and friends. Viewing of Sue's memorial service is available online via Livestream at: https://livestream.com/accounts/13846112/events/6010990

The family of Sue Justus created this Life Tributes page to make it easy to share your memories.

Send flowers to the Justus family.