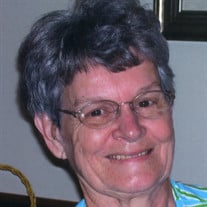 Sylvia Nadine Dirksen of Auburn, Nebraska, was called to her heavenly home to be with her Lord on January 13, 2015 at the age of 79. Sylvia became ill before Thanksgiving, but God found a way to let her family share a last Christmas together. Sylvia was the oldest daughter of Herman F. Warnke and Myrl F. (Ashcraft) Warnke of Tecumseh, Nebraska. She and her sister Carolyn helped with the family grocery store while growing up. She graduated from Tecumseh Public Schools in 1953, where she met her husband Les Dirksen. Sylvia was baptized on May 7, 1939 and later confirmed on August 26, 1952 at St. John Lutheran Church in Tecumseh. She belonged to various church organizations at St John and later joined Trinity Lutheran Church in Auburn when she and Les moved there in 2010. On December 4, 1955 Sylvia was united in marriage to Leslie R. Dirksen. Les was a farmer, and Sylvia had a lot to learn! She loved retelling stories of the mistakes and successes of their early farming years. Les and Sylvia were blessed with 2 sons, Terry and Don. Together the family farmed near Johnson, Nebraska and enjoyed taking care of the livestock and the land. Les and Sylvia resided on the same farm for 50 years until they moved to Auburn. Through the years, Sylvia also took on extra jobs in town. She was a life member of the Johnson American Legion Auxiliary and belonged to the County Extension Club. During her free time she enjoyed bowling, gardening, and entertaining any visitor who happened to stop in. All were welcomed, especially if they would stay and play a game of cards! Some of her family’s best times were spent around the table, whether eating a great meal or playing games. Sylvia loved traveling with Les and their sons’ families as often as possible. Sylvia was preceeded in death by her parents, Herman and Myrl Warnke and her sister Carolyn Foetisch. She is survived by her husband of 59 years, Les; her sons Terry and his wife Becky of Clarinda, Iowa; and Don and his wife Cheryl of Kearney, MO. Grandchildren are: Mitch, wife Shannon, and son Parker from Kansas City, MO; Jessica, husband Cody, children Carson, Blake, and Paige from Pocahontas, IA; Tyler from Lawrence, KS; Kelsey from Bakersfield, CA; and Matthew, Sarah, and daughter Stella from Maryville, MO. And many, many dear family and friends. Sylvia lived for her faith, family, and friends. May the Lord grant comfort to all those whom she loves that mourn her passing. A funeral service will be Saturday, January 17, 10:30 a.m. at Trinity Lutheran Church in Auburn. Burial will be at Spring Creek Cemetery near Tecumseh. Visitation will be at the funeral home Friday 9:00 a.m. to 8:00 p.m., with family greeting friends 6:00 to 8:00. Memorials are suggested to Trinity Lutheran Church.

Sylvia Nadine Dirksen of Auburn, Nebraska, was called to her heavenly home to be with her Lord on January 13, 2015 at the age of 79. Sylvia became ill before Thanksgiving, but God found a way to let her family share a last Christmas together.... View Obituary & Service Information

The family of Sylvia N. Dirksen created this Life Tributes page to make it easy to share your memories.

Sylvia Nadine Dirksen of Auburn, Nebraska, was called to her...

Send flowers to the Dirksen family.