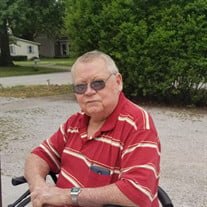 Terry Lee Jarvis, one of four children to Jim and Evelyn (Mitchell) Jarvis was born July 20, 1939 in Nemaha, Nebraska. Terry attended Nemaha School and graduated from Nemaha High School. While attending school, Terry stripped blue grass with his dad in the summers. Directly after high school he drove a rock truck. Terry met Mary Simpson at the Nemaha Picnic in 1958. The couple wed on June 19, 1960 at Coryell Park among family and friends. From this union, the couple was blessed with one daughter, Jody. Terry worked at Gambles and as a car salesman for Johnson Motors in Auburn. The family moved to Lexington, Nebraska for a short time where Terry sold cars for Hodges. After returning to Auburn, Terry began as a truck driver for Balk Carriers. The family built a permanent home in Auburn in 1962. Terry continued driving a truck for Pacific Intermountain Express (P.I.E.) out of Omaha, transferring to Ankeny, Iowa and Wichita, Kansas until 1986. Terry and Mary moved back to Auburn to be close to family, now including grandchildren. Terry drove for Consolidated Freight (CF) out of Lincoln until his retirement in 1997. In December of 1982, Terry and Mary welcomed their first grandchild, Lyndsey Kay. Shortly after another granddaughter was born, Lacy Morgan. In 1989, a grandson, Benjamin Patrick, joined the family. Terry loved his grandchildren with all of his heart. During his working years, breakfast was one of his favorite meals to have with his grandkids rather at Darling’s Café or making family favorites for them at home. During retirement, Terry never missed an activity, sporting event, or celebration for these three. It was not uncommon to see Terry dropping off forgotten items at school or teaching all three how to drive. Later in life, Terry was blessed with five great-grandchildren. He surrounded himself with loving family and many friends. Terry enjoyed playing cards, going to coffee, visiting residents at the Good Sam and Longs Creek. Terry loved cars, lottery tickets, Keno, and dogs. He especially loved his four-legged buddy Cash from across the street. On May 16, 2021, Terry passed away with Mary by his side, happy to have lived a full and joyous life. He was proceeded in death by his parents, brother Jim, and sister Linda. Terry is survived by his wife Mary of Auburn; daughter and son-in-law Jody and Gary Adams of Auburn; grandchildren Lyndsey and Matt Harms of Hickman, NE; Lacy and Riley Gerdes of Auburn, and Ben Adams of Auburn; great-grandchildren Hayden Gerdes, Kinsley Gerdes, Harper Harms, Langley Gerdes, and Miles Harms; brother Steven Jarvis of Auburn; other relatives and many friends. A funeral service will be Wednesday, May 19, 2:00 p.m. at Hemmingsen Funeral Home in Auburn. Burial will follow in Sheridan Cemetery. Visitation will be at the funeral home Tuesday 9:00 a.m. to 8:00 p.m., with family greeting friends 6:30 to 8:00. Memorials are suggested to Auburn Fire and Rescue or Sheridan Cemetery.

The family of Terry Jarvis created this Life Tributes page to make it easy to share your memories.

Terry Lee Jarvis, one of four children to Jim and Evelyn (Mitchell)...

Send flowers to the Jarvis family.