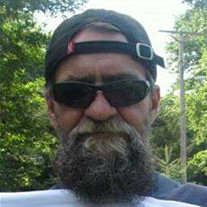 Todd Elmer Huffman, one of five children of Elmer Huffman, Jr. and Naomi (Shiveley) Huffman, was born December 21, 1962 in Auburn, Nebraska. He attended school at Locust Grove rural school and Auburn public schools. Todd was married to Johnnie Douglas in Tulsa, Oklahoma. They were blessed with two children, Jessica and Kelsey. The couple eventually divorced. Todd later became the father of a third child, Hayden. Todd was a tree trimmer, and a good one. He mostly was self-employed, but worked for a time for a company in Lincoln, Nebraska. In his spare time, Todd enjoyed hunting and fishing. He especially loved it when his grandchildren could be there with him. Todd passed away unexpectedly at his home in Nemaha on Wednesday, May 27, 2015. He had reached the age of 52 years, 5 months, and 6 days. His parents, grandparents, brother Pete, nephew Matt Huffman, and grandson Henry Cotton preceded him in death. Todd is survived by his children Jessica and husband Jim Smith of Peru; Kelsey Huffman of Peru; Hayden Huffman of Auburn; grandchildren Cassius Cotton and Erin Smith; sisters Peg and husband Corky Jones of Brownville; Tina and husband Ed McCorkle of Camdenton, MO; brother Jerry and wife Kelley Huffman of Raymond, NE; former wife Johnnie Huffman of Auburn; many nieces & nephews, other relatives and friends.

The family of Todd Huffman created this Life Tributes page to make it easy to share your memories.

Send flowers to the Huffman family.