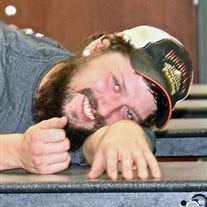 Trenton Carl Stutheit, son of Mervin and Linda (Douglas) Stutheit, was born February 13, 1988 in Auburn, Nebraska. Trent started school in Falls City, Nebraska, then went to Dawson-Verdon, and back to Falls City, where he graduated from high school. Trent was a three-sport athlete in high school, football, wrestling, and track. He went on to attend and earn his Bachelor’s Degree from The Creative Center in Omaha. Trent worked at various jobs in Omaha, mostly in food service management. He worked for many years at Famous Dave’s. Most recently Trent was learning the flooring business as a flooring tech. While working at Famous Dave’s, Trent met a co-worker, Amanda Schulte. A spark was ignited, and together they had a daughter, Annella Pearl. Though they didn’t stay a couple, they remained good friends, and Trent was always a big part of Annella’s life. In addition to his family, Trent loved the Arts. He enjoyed music, drawing, writing, and building things. He was comfortable outdoors, and loved hiking in the mountains of Colorado, off-roading, and rock-climbing. He also participated in cage fighting. Trent’s life was taken suddenly on Easter Sunday, April 16, 2017. He passed away at Creighton University Medical Center in Omaha, at the young age of 29 years, 2 months, and 3 days. He was preceded in death by his uncle Rick Haith, his grandparents Bob & Colleen Judd, George Anderson, Richard Douglas, Thomas Portrey, and Betty Blevins, and his great-grandmother Ruby Douglas. Those who survive Trent include his daughter Annella of Omaha; Annella’s mother Amanda Schulte of Omaha; mother and step-father Linda and Patrick Portrey of Shubert; father and step-mother Mervin and Patty Stutheit of Dawson; grandmothers Judie Douglas of Peru; Daisy Anderson of Humboldt; brothers and sisters Jamie Vaughan of Auburn; Tyler (Jenny) Stutheit of Humboldt; Danielle (Michael) Wilkinson of Lincoln; Jessica (Michael) Murphy of Peru; Michael Portrey (fiancée Tricia Angell) of Aguilar, CO; Jim Nincehelser of Dawson; Joshua Nincehelser (significant other Courtney DeBuhr) of Dawson; Jacob (Melanie) Nincehelser of Columbus; many aunts, uncles, nieces, nephews, cousins, other relatives, and many friends. A funeral service will be Saturday, April 22, 2:00 p.m. at Hemmingsen Funeral Home in Auburn. Trent’s body will be cremated following the service, and burial of ashes will be at a later date at Mt. Vernon Cemetery at Peru. Visitation will be at the funeral home Friday 9:00 a.m. to 8:00 p.m., with family greeting friends 6:00 to 8:00. Memorials are suggested to the Annella Pearl Stutheit Trust Fund. To watch Trent's service click here: https://livestream.com/accounts/13846112/events/7301052

Trenton Carl Stutheit, son of Mervin and Linda (Douglas) Stutheit, was born February 13, 1988 in Auburn, Nebraska. Trent started school in Falls City, Nebraska, then went to Dawson-Verdon, and back to Falls City, where he graduated from... View Obituary & Service Information

The family of Trenton Carl Stutheit created this Life Tributes page to make it easy to share your memories.

Send flowers to the Stutheit family.