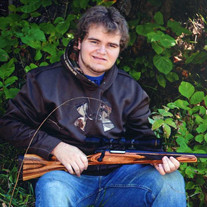 Tyler Michael Armknecht, son of Christopher Scott Armknecht and Morie Jo (Esser) VanDerslice, was born February 17, 1995 in Lincoln, Nebraska. He died unexpectedly on Friday, May 9, 2014 in an automobile accident near Louisville, Nebraska. In Tyler's early years, he attended Seward Public School through 8th grade and then transferred to Johnson-Brock High School where he graduated with the Class of 2013. During high school, Tyler played football his freshman year, was a cast member in the school play his senior year and a member of FFLA. After graduating, he moved to Lincoln and was currently attending Southeast Community College where he was to graduate in December with a degree in welding. Tyler enjoyed hunting, fishing, and being with friends. Above all, he enjoyed spending time with his family. Tyler loved to have a good time, was warm hearted and a friend to all. In recent months, he enjoyed playing the guitar and being part of a band. Survivors include his parents: Chris Armknecht of Johnson and Morie and husband Mike VanDerslice of Seward; three siblings: Colby and Austin VanDerslice of Seward; Sage Armknecht of Johnson; grandparents: Leland and Judy Esser of Vermillion, SD, Elmer and Jo Armknecht of Johnson, Paul and Janice VanDerslice of Seward; great-grandparents: Julia Miller of St. Joseph, MO, Les and Yvonne Davis of West Plains, MO and Bud and Dottie Feichtinger of Johnson, NE; aunts and uncles: Adam and Tab Meyer of Rock Port, MO, Mitch and Terri Bishop of Auburn, Travis and Samantha Root of Onawa, IA, Brian and Heather VanDerslice of Seward; cousins: Jarred Stutheit, Kylie Stutheit and Isabelle Bishop all of Auburn, and Landry Root of Onawa, IA; several great-aunts and -uncles; other relatives and many friends. Tyler was preceded in death by his great grandparents: Roy and Mary Esser, Joe Miller, Elmer Armknecht, Sr. and Norma Armknecht. A funeral service will be held Wednesday, May 14, 4:30 p.m. at the Johnson-Brock High School gym in Johnson. Burial will follow in the Johnson Cemetery. Visitation will be at the funeral home Tuesday 9:00 a.m. to 8:00 p.m., with family greeting friends 6:00 to 8:00. Memorials are suggested to Madonna Rehabilitation Hospital in Lincoln.

The family of Tyler Michael Armknecht created this Life Tributes page to make it easy to share your memories.

Send flowers to the Armknecht family.