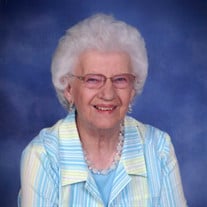 Velma Marie Morton, one of four children of Henry and Clara (Lampe) Aden, was born May 28, 1927, on their family farm north of Humboldt, Nebraska. She was raised on that farm and attended Bratton Union Consolidated School, graduating with the class of 1945. Velma was baptized and confirmed into the Christian faith at St. John’s Lutheran (Stone) Church near Auburn. On January 15, 1947, Velma was united in marriage to Morris DeFreece at Hiawatha, Kansas. The couple would be blessed with a son, Richard, but would later divorce. Velma went on to marry Edward Henderson on December 24, 1952 in Papillion, Nebraska. Edward passed away May 7, 1971. She then was married to Charles Morton on May 9, 1990 at Forsyth, Missouri. Charles passed away on September 10, 2003. Velma worked at Tushla Hospital in Auburn for a number of years before being employed at Danny/Debby Dare Manufacturing in Auburn for 30 years. She also worked for Drs. Crotty and Crotty in Auburn for 15 years, before retiring June 1, 1990. Velma was a member of St. Paul Lutheran Church in Auburn and belonged to the Eagles Aerie 3767 in Auburn. She enjoyed embroidery work, especially quilting, playing cards and bingo, and also traveling. When she was no longer able to stay at home, Velma moved to the Good Samaritan Society in Auburn. It was there that she passed away on Monday, September 14, 2020, having reached the age of 93 years, 3 months, and 17 days. She was preceded in death by her parents, brother Raymond Aden, husbands Edward and Charles, grandson Bradley DeFreece, sisters and brothers-in-law Luella and Leonard Eitzmann, and Erma and John Brewer. Velma is survived by her son Richard and wife Beth DeFreece of North Platte; step-grandchildren Khris and wife Rachel Thexton of Great Bend, KS; step-great-grandchildren Paige, Kade, and Kolbie Thexton. There will be no services at this time, burial of ashes will be at a later date in Fort McPherson National Cemetery at Maxwell, Nebraska. Memorials suggested to St. Paul Lutheran Church in Auburn. Services were entrusted to Hemmingsen Funeral Home of Auburn.

Velma Marie Morton, one of four children of Henry and Clara (Lampe) Aden, was born May 28, 1927, on their family farm north of Humboldt, Nebraska. She was raised on that farm and attended Bratton Union Consolidated School, graduating with... View Obituary & Service Information

The family of Velma Marie Morton created this Life Tributes page to make it easy to share your memories.

Velma Marie Morton, one of four children of Henry and Clara (Lampe)...

Send flowers to the Morton family.