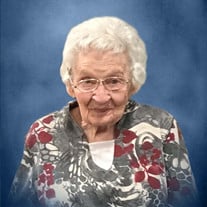 Verna Parriott Hall, 97, was born on a farm near Elmwood, Nebraska on December 21, 1919 and died at Good Samaritan Society in Auburn, Nebraska on November 10, 2017. Her parents were John L. and Arta Draper Parriott. Verna ‘s family moved to a farm near Dawson, Nebraska when she was small. Verna attended Dawson School beginning in kindergarten and graduated from Dawson High. She attended Peru State Teacher’s College. Verna was married to Charles J. (Charlie) Hall, May 24, 1945. They established their home on a farm near Dawson and then moved to a farm near Table Rock in 1948 where they resided until 1960. They moved to Pawnee City where Verna worked in the County Superintendent’s office and then in the Union Bank. Verna moved to Longs Creek Village Assisted Living in Auburn, Nebraska in 2011 and resided there until February 2017 when she moved to Good Samaritan Society in Auburn, Nebraska . Verna was a dedicated member of the United Methodist Church and United Methodist Women in Pawnee City for over 60 years. She was a member of civic organizations and volunteered in various ways including Meals on Wheels and Hospice. She was a fine pie baker, beautiful seamstress, gracious hostess, enthusiastic traveler, and an avid bridge player. She loved her family dearly and cherished the time she had with them. She was preceded in death by her parents, her three sisters, Genevieve Gergen, Margaret Tynon, and Phyllis Comstock , and her husband of 57 years Charlie Hall. She leaves wonderful memories for her children; her daughters Joan (Joanie) Strohm and husband Stan of Marshall, North Carolina, Patricia (Trish) Merrill and husband Mac White of Austin, Texas, and son Dr. Charles J. (Chuck) Hall and wife Eliane of San Antonio, Texas. Her grandchildren who were so special to her; Greg Strohm, Mark Strohm, Steve Strohm, Chris Strohm, Matthew Pangborn, Rachel J. McCasland, Katy Andre, Rachel E. Weddell, Laura Merrill and Sarah Moses. Verna leaves to celebrate her life 16 great-grandchildren, one great-great-granddaughter and many nieces and nephews. A funeral service will be 2:00 p.m., Saturday, November 18, 2017, at Pawnee City First United Methodist Church, officiated by Pastor Sherry Sklenar. Visitation will be one hour prior to the service. Burial will follow in Prairie Union Cemetery at Shubert. Memorials can be made to Pawnee City United Methodist Women, Legacy Fund.

The family of Verna Hall created this Life Tributes page to make it easy to share your memories.

Verna Parriott Hall, 97, was born on a farm near Elmwood, Nebraska...

Send flowers to the Hall family.