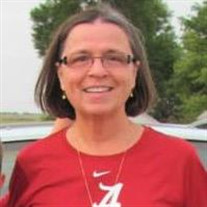 Veronica Diane “Ronnie” Smith, one of nine children of Benard Easton and Nancy “Lola” (Wilson) Landers, was born May 18, 1954, in Decatur, Alabama. Ronnie grew up and attended school in Alabama. The North joined the South when Ronnie married Joel Lee Smith, of West Virginia. Together they raised two sons, Andrew Lee and Joel Lynch. Ronnie was a loving daughter, sister, wife, mother and grandmother. She was an excellent cook and seamstress, and a meticulous gardener, even raising a few rows of cotton. Ronnie loved the holidays with family, and always made them special, making for great memories. Ronnie enjoyed fishing, and was very good at it. She also loved her music, and enjoyed a good concert with family or friends. Even after leaving the South, Ronnie always kept that southern hospitality, she never knew a stranger and was always willing to carry on a conversation with anyone about ‘most anything, as long as they were willing to listen. She was a dedicated supporter of Andy and Joey in their raising, schooling, participation in sports, and, whenever she could, for the grandchildren care. After a diagnosis of cancer and battling that for nearly a year at home, Ronnie became a resident of Tabitha at Williamsburg-Seagren House in Lincoln. It is there that she died on Thursday, March 9, 2017, having reached the age of 62 years, 9 months, 19 days. Joel, Andy, and Joey were with her that day and helped set her free. Her mother Nancy “Lola”, father Benard Easton, sister Sarah Miller, and brother Benard “Junior” preceded her in death. Those left to celebrate her life are her husband Joel of Auburn; sons Andy and wife Krista of Lincoln, Joey and special friend Jennifer of Lincoln; grandchildren Benjamin, Chloe, Laney, Grady; previous daughter-in-law Jennifer Smith of Lincoln; two brothers, Bruce (Debbie) Landers, Tony Landers, and four sisters, Venita Corliss, Rita (Andy) Hart, Twana Landers, and Selina (Jerry) Standridge, all of Alabama; other relatives; and many friends. Ronnie’s wishes were to be cremated and taken to Alabama for burial, there will be no local services or visitation. Memorials are suggested to Tabitha Hospice.

The family of Veronica "Ronnie" Smith created this Life Tributes page to make it easy to share your memories.

Veronica Diane “Ronnie” Smith, one of nine children of Benard...