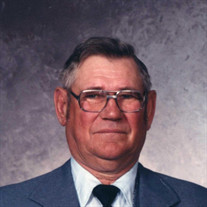 Virgil Friedrich Plager, one of three children of Eli and Lydia (Borrenpohl) Plager, was born October 19, 1928 on the family farm near Elk Creek, Nebraska. Virgil was baptized at St. James Lutheran (Long Branch) Church on November 25, 1928, his Godparents were uncles Friedrich Bohrenpohl and Friedrich Plager. He was confirmed October 25, 1942, also at St. James, and his confirmation verse was Psalm 1:1. “Curly”, as he was known, grew up on the family farm, and attended Greenfield Country School thru the 8th grade just down the road. At a young age, Curly began helping out on the family farm, and continued farming his entire life. He and his brother Ed purchased a bulldozer in the early 1950’s and started Plager Brothers Construction. At just 30 years old, Curly lost his hand in a farming accident, but he never let that hold him back and continued farming and operating the dozer. A life-long member of St. James Lutheran (Long Branch) Church, Curly served several years on the church council. A man of few words, Curly always enjoyed driving around the countryside with his brother Ed, and his Sundays that were always spent with his sister Dorothy. Curly spent his entire life on the family farm near Elk Creek. When his health no longer allowed, he then became a resident of Ridgeview Towers Assisted Living in Tecumseh, and then moved to Colonial Acres in Humboldt. Curly was transported to Johnson County Hospital in Tecumseh and it is there that he passed away on Sunday, April 25, 2021, having reached the age of 92 years, 6 months, and 6 days. He was preceded in death by his parents, sister Dorothy Plager, and brother and sister-in-law Ed and Ev Plager. Those left to remember his quiet demeanor include his nephew Glenn and wife Rebecca Plager of Elk Creek; nieces Christy and husband Russ Waring of Tecumseh, Karen and husband Matt McCoy of Lincoln; great-nieces and -nephews Kelsee and husband Justin Sayer, Zadie Plager, Mason, Eli, and Jack Waring, Wil and Ava McCoy; great-great-nieces Quinlee, Peri, and Ramsie Sayer; other relatives and friends. Funeral service will be Thursday, April 29, 2021, 10:00 a.m., at St. James Lutheran (Long Branch) Church near Humboldt. Burial will follow in St. James Lutheran Cemetery. Visitation will be on Wednesday at Hemmingsen Funeral Home in Auburn from 9:00 a.m. to 8:00 p.m. Memorials are suggested to family choice.

The family of Virgil "Curly" Plager created this Life Tributes page to make it easy to share your memories.

Virgil Friedrich Plager, one of three children of Eli and Lydia...