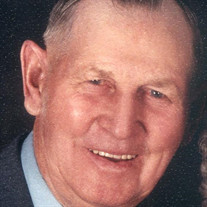 Walter Henry Fred Gebers, one of four sons of John F. and Frieda (Bruns) Gebers, was born October 31, 1925 at Auburn, Nebraska. He graduated from the 8th grade in country school and was confirmed in 1939 at St. Paul (Hickory Grove) Lutheran Church near Auburn. Walt served in the United States Navy from February 14, 1944 to June 5, 1946, when he received his honorable discharge and returned to Auburn. He was a Ship’s Cook Third Class at Fleet Recreation in Oahu, Hawaii. On June 28, 1949 Walt was united in marriage to Doris Gael Gebers. They would be blessed with five children: Linda Sue, Ronald James, Charles Leroy, Judy Lynn, and Lisa Marie. The couple made their first home in Auburn, and moved to various homes in and around Auburn until August of 1957, when they moved to Johnson, Nebraska. They bought their first home on the east edge of Johnson in 1967, and in 1988 bought their place on the northwest corner of town. In 1958 Walt and Doris joined Zion Lutheran Church north of Johnson. Walt worked at many jobs before his service and after returning home. He worked for the Swift Company and then a filling station in Auburn, as a cook at the American Legion Club in Nebraska City, Nebraska, and for several farmers. In 1957 he went to work at Clark Grain in Johnson, and worked there for 33 years until his retirement. Even after retirement he worked part time hauling trash and taking care of the Johnson dump. In 2012 Walt became a resident of the Good Samaritan Society-Auburn. While there he enjoyed visits from Doris and the kids and grandkids as well as friends. He passed away at Good Sam on Sunday, August 2, 2015 at the age of 89 years, 9 months, and 2 days. In addition to his parents, Walt was preceded in death by a stillborn baby girl and brothers John and Loren. Those left to remember Walt include his wife Doris of Auburn; children and spouses Linda and Winston Rice of Clarita, OK; Ron and Kathy Gebers of Auburn; Charles and Gloria Gebers of Clarita, OK; Judy and Dwayne Feighner of Auburn; Lisa and Brian Finch of Lincoln; 9 grandchildren; 15 great grandchildren; brother Herold and wife Rose Gebers of Lincoln; sister-in-law Inez Gebers of Johnson; other relatives and friends. A funeral service will be Wednesday, August 5, 10:30 a.m. at Zion Lutheran Church near Johnson. Burial will follow in the church cemetery. Visitation will be at the funeral home in Auburn Tuesday 9:00 a.m. to 8:00 p.m., with family greeting friends 6:00 to 8:00. Memorials are suggested to family choice.

Walter Henry Fred Gebers, one of four sons of John F. and Frieda (Bruns) Gebers, was born October 31, 1925 at Auburn, Nebraska. He graduated from the 8th grade in country school and was confirmed in 1939 at St. Paul (Hickory Grove) Lutheran... View Obituary & Service Information

The family of Walter H. Gebers created this Life Tributes page to make it easy to share your memories.

Walter Henry Fred Gebers, one of four sons of John F. and Frieda...

Send flowers to the Gebers family.