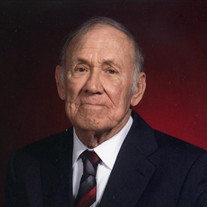 Wayne Theodore Glasser, one of four children of Ira and Marie Victoria (Nelson) Glasser, was born October 11, 1928 at the family home near Hordville, Nebraska. He attended District 65 School near Hordville through the 8th grade, and graduated from Polk High School in Polk, Nebraska in May of 1945. He then attended Chillicothe Business College in Chillicothe, Missouri to receive training to be a railroad telegraph operator. On April 25, 1948 Wayne was united in marriage to Dolores Kathleen Rhode at the Immanuel Lutheran Church Parsonage in rural Polk, Nebraska. The couple’s first home was in Grand Island, Nebraska, and they lived in several other Nebraska communities until settling in Madison, Nebraska in 1957. They would be blessed with two children, Michael Wayne and Melissa Kathleen. Wayne entered the U. S. Army in March of 1952. He served at Ft. Eustis in Virginia during the Korean War, reaching the rank of Corporal. After his honorable discharge in March of 1954 Wayne and Dolores returned to Nebraska. As a young man, Wayne worked at several different jobs in Norfolk, Madison, and Columbus, Nebraska. After his schooling, in March, 1946, he took a position with the Union Pacific Railroad. Through the years Wayne worked as an agent/telegrapher for the railroad at several locations until his retirement in December, 1989. Wayne was baptized and confirmed at Immanuel Lutheran Church in Columbus on January 16, 1949 by Pastor Guettler. He remained a member of that church until transferring to Trinity Lutheran Church in Madison in 1957, where he was a member until his death. In addition to his church membership, Wayne was a member of American Legion Post #35 in Madison. He served as a Madison City Councilman from 1970 to 1990, and as Mayor of Madison from 1992 to 1994. For health reasons, Wayne and Dolores moved to the home of their daughter in Auburn, Nebraska August 15, 2015. It was there, with family around him, that Wayne passed away on Tuesday, September 29, 2015 at the age of 86 years, 11 months, and 18 days. In addition to his parents, he was preceded in death by his brother and sister-in-law Gene and Viva Glasser; sisters- and brothers-in-law Leland Jackson; Elvera and George Weiler, Edgar and Lorette Rhode, Margaret and Eric Heiden, Dorothy and Elmer Sackchewsky, Helen and Melvin Elhers, Donald Rhode, Delbert Rhode, Luella Rash, and Richard Pinnow. Those left to cherish their memories of Wayne include his wife Dolores of Auburn; son Michael of Pooler, GA; daughter and son-in-law Melissa and Dan Buman of Auburn; granddaughters Emma and husband Travis Yocum and Lilly Glasser; grandson Michael and wife Rachel Curry; great-granddaughter Chloe Curry; sisters Betty Jackson of Lincoln, NE; Jane Hanley and husband Jim of Bar-Nunn, WY; sisters- and brothers-in-law Clarence and Isabelle Rhode, Phyllis Pinnow, and Barbara and Franklin Pinnow; other relatives and many friends. A memorial service will be Monday, October 5, 2:00 p.m. at Trinity Lutheran Church in Madison. Burial will follow at Crown Hill Cemetery at Madison, with graveside military honors provided by American Legion Post #35 and VFW Post#5763 of Madison and the Nebraska National Guard Honor Guard. Memorials are suggested to family choice.

Wayne Theodore Glasser, one of four children of Ira and Marie Victoria (Nelson) Glasser, was born October 11, 1928 at the family home near Hordville, Nebraska. He attended District 65 School near Hordville through the 8th grade, and graduated... View Obituary & Service Information

The family of Wayne Theodore Glasser created this Life Tributes page to make it easy to share your memories.

Wayne Theodore Glasser, one of four children of Ira and Marie...

Send flowers to the Glasser family.