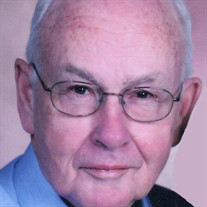 William Lee Clark, Jr., only child of William Lee and Esther (McKee) Clark, was born September 29, 1933, in Beatrice, Nebraska. Bill attended numerous schools as his father’s job required moving often. He graduated from Johnson High School in Johnson, Nebraska. He then attended the University of Nebraska in Lincoln and earned his business administration degree. Bill served in the U.S. Navy Reserves during college and after graduation enlisted in the U.S. Army. He was stationed in Korea, received an honorable discharge, and returned to Johnson. In September of 1959 Bill was united in marriage to Marilyn Dunker in Ulysses, Nebraska. They made their home in Johnson and would be blessed with four children: Diane, Steven, Carol, and Brian. During his high school years Bill worked in the family grain elevator business in Johnson and continued after his military service. He loved the business and enjoyed having his family work alongside him at Clark Grain Co. Bill was very active in the Johnson community. In addition to being a member of the United Methodist Church there, he served on the School Board, the Volunteer Fire Department, the Village Board and was a longtime member of the Chamber of Commerce. In his spare time Bill loved to golf. As his children were growing it was a Sunday tradition for the whole family to go golfing after church. When Bill’s health required extra care he became a resident of Southlake Village in Lincoln, Nebraska. It was there, with family around him, he passed away on Saturday, April 2, 2022, having reached the age of 88 years, 6 months, and 4 days. In addition to his parents, Bill was preceded in death by his son Steven, grandson Thomas William Clark, sisters- and brothers-in-law Virginia and Jim Amen, Annis and Val Kemper, Helen Dunker, Joe Prazak, and Marjorie and Allen Clark. Bill will be forever remembered by his wife Marilyn; daughters and sons-in-law Diane and Dwaine Sohnholz of Omaha, Carol and Mike Morrow of Malcolm; son and daughter-in-law Brian and Rhonda Clark of Johnson; grandchildren Adam and Amanda Morrow, Benjamin, Sophie, Maggie, and Natalie Clark; sister-in-law Dorothy Prazak of Lincoln; brother-in-law Lyle Dunker of Seward; other relatives and friends. Visitation will be at the funeral home in Auburn Wednesday 9:00 a.m. to 8:00 p.m., with family greeting friends 6:00 to 8:00. A private family memorial service will be followed by burial of ashes in the Vesta Cemetery. Memorials are suggested in lieu of flowers.

The family of William "Bill" Clark created this Life Tributes page to make it easy to share your memories.

Send flowers to the Clark family.