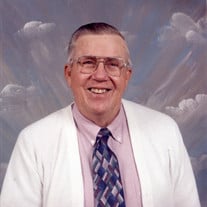 William Edgar Dahlke, son of Adolf and Lydia (Kehr) Dahlke, was born March 5, 1923 in Graf, Nebraska. He was baptized and confirmed as a boy, attended rural school through the 8th grade, and graduated from Auburn High School in Auburn, Nebraska. Bill then worked at Grant’s Grocery in Auburn. On January 13, 1943 Bill joined the U.S. Navy during World War II. He served as a Radio Mate on the U.S.S. Kadashan Bay, an aircraft carrier, in the Pacific Theater. Bill received his honorable discharge on January 29, 1946 and returned to Auburn. Bill was married to Norma Humphrey in Auburn and they were blessed with a son, Donald Michael. The couple later divorced. On August 10, 1985 Bill was united in marriage to Helen I. (Pebley) Harms at St. Paul Lutheran (Hickory Grove) Church near Auburn. They made their home in Auburn, and Bill felt blessed to make Helen’s family his own. Bill owned and operated Dahlke Plumbing and Heating in Auburn. He continued to operate the business for many years until selling it. After the sale, he helped Jerry Tuxhorn with his electric business. Bill had attended the Auburn Christian Church with Norma and went to Hickory Grove Church with Helen. He was a member of the Auburn American Legion Post #23, Kiwanis, the Auburn Chamber of Commerce, and served as President of the Auburn Ambassadors. He enjoyed golfing and was charter member of Kirkman’s Cove Golf Course. He spent many hours getting the Kirkman’s course up and running, including wiring the club house. He rode his motorcycle to and from Kirkman’s well into his 70’s. Bill and Helen loved to go dancing at the Auburn Eagles Club and other locations almost every weekend. He very much liked going to coffee, and when he could no longer walk or bike he began riding his lawn mower to the coffee shop. When his health made it necessary Bill entered the Good Samaritan Society-Auburn in October of 2016. It was there he passed away on Wednesday, July 17, 2019 at the age of 96 years, 4 months, and 12 days. In addition to his parents, Bill was preceded in death by his wife Helen on August 25, 2017, his son Mike on May 15, 2007, sister Helen Robbins, and brother Bob. Bill is survived by his grandchildren Michael Scott Dahlke of Arkadelphia, AR, Leigh (Benjamin) Laney of Rogers, AR; step-daughter Arnelda (Jim) Biaggi of Auburn; step-grandchildren Brandy (Ed) Christen, Benjamin (Casey) Biaggi, Mandy (Sheldon) Turley; great-grandchildren Kaitlyn, Logan, Noah Dahlke, Emma Laney; step-great-grandchildren Connor, Chelsea Christen, Jonathan, Kendall, Jaxson Biaggi, Briggs Turley; half-siblings Mildred, Jim, Sharon; other relatives and friends. A funeral service, officiated by Rev. Ken Miller, was Saturday, July 20, 2019 at St. Paul Lutheran (Hickory Grove) Church near Auburn. Deanne Gerking was organist and accompanist for a solo by Allyn Remmers and congregational singing. Casket bearers were Scott Dahlke, Mark Robbins, Bob Yelkin, Sheldon Turley, Rodney Pebley, and Al Armstrong. Ed Christen was honorary bearer. Burial was in Sheridan West Cemetery near Auburn with graveside military honors by American Legion Post #23 of Auburn and the U.S. Navy Honors Detail.

William Edgar Dahlke, son of Adolf and Lydia (Kehr) Dahlke, was born March 5, 1923 in Graf, Nebraska. He was baptized and confirmed as a boy, attended rural school through the 8th grade, and graduated from Auburn High School in Auburn,... View Obituary & Service Information

The family of William "Bill" Dahlke created this Life Tributes page to make it easy to share your memories.

Send flowers to the Dahlke family.