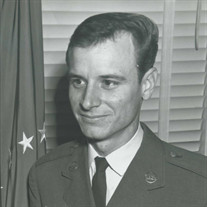 William Thomas Garrett, Jr. was born April 3, 1941 in Groesbeck, Texas to William T., Sr. and Donella (Cox) Garrett. He attended school in Groesbeck and graduated from high school. Shortly after high school Bill joined the U. S. Air Force. He began his service in 1959 at Lackland AFB in San Antonio, Texas. Most of his time was as a Communications and Intelligence Officer with the Air Force Security Service. Bill was in Tech School at San Angelo before stationing at Kadena AFB in Okinawa from 1962 to 1965. In 1962 Bill was transferred to R.A.F. Chicksands in England until 1965 when he returned to Kelly AFB in San Antonio and received his honorary discharge. Bill then served his country in the National Security Agency at Ft. Meade in Maryland. Bill worked for many years in the mobile home industry and for most of his career he was in southern states of the U. S. Much of his career was with Redman Mobile Homes working in corporate headquarters as a purchasing agent. He was in charge of opening new plants and closing existing ones no longer operational. While working in Florida he met the love of his life, Mary Lantz. On January 3, 2002, Bill was united in marriage to Mary at the Nemaha County Courthouse in Auburn, Nebraska. They had moved to rural Auburn from Texas and made their home here. Bill was a member of the Masonic Lodge during his time in Texas. He was an outdoorsman who had enjoyed hunting and boating during his lifetime. He very much enjoyed firearms and shooting at the range. Having a “cold one” with family and friends was not an uncommon pastime. Failing health made it necessary for Bill to stay at home with Mary, other family and friends, and medical professionals all helping to care for him. He passed away at his home near Auburn on Friday, July 2, 2021, having reached the age of 80 years, 3 months, and one day. His parents preceded him in death. Bill is survived by his wife Mary; sons and daughter-in-law Billy and JoAnne of Paso Robles, Ca; John of Breckenridge, CO; grandchildren Brighton and “Sonny”; two sisters and a brother; other relatives and friends. Bill’s body has been cremated and services will be later in his home state of Texas.

The family of William "Bill" Garrett created this Life Tributes page to make it easy to share your memories.

Send flowers to the Garrett family.