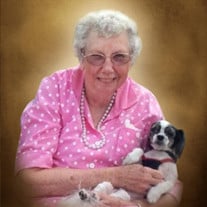 Wilma Irene (Kuhl) Antholz, one of four children of Edgar and Elizabeth (Meints) Kuhl, was born August 6, 1928 in Elk Creek, Nebraska. She was baptized and confirmed at St. John’s Lutheran Church in Tecumseh, Nebraska. Wilma attended school in Elk Creek, where she graduated from high school. She then attended Peru State Teachers College, where she received her teaching certificate. Wilma then taught in country schools for three years. On January 12, 1950, Wilma was united in marriage to Norman E. Antholz at St. John’s Lutheran in Tecumseh. The couple’s first home was near Elk Creek, Nebraska, and they later moved to Cook and then Johnson, Nebraska. Their union was blessed with four children: Diane, Keith, Duane, and Nancy. Wilma and Norman moved to Tecumseh later in life. Wilma stayed at home in the early years of her marriage, raising the children and running the household. She later served as an X-Ray Tech at Nemaha County Hospital in Auburn and then Johnson County Hospital in Tecumseh. From there, Wilma went to the Beatrice State Developmental Center in Beatrice, where she worked as a Lab and X-Ray Tech. She retired after several years at BSDC. Wilma was a member of Zion Lutheran Church near Johnson from the time they moved to Johnson. In her retirement years, she enjoyed helping others, just as she had done throughout her life. She also liked to take day trips with family and friends. After Norman’s passing in January of 2004, Wilma continued to live in Tecumseh for many years. A fall in late 2016 made it necessary to move to Gold Crest Retirement Center in Adams, Nebraska. It was there she passed away on Friday, May 19, 2017, at the age of 88 years, 9 months, and 13 days. In addition to her parents and husband Norman, Wilma was preceded in death by her sister Marlene and brother Vernon. Wilma is survived by her children Diane (Allan) Dermann of Lincoln; Keith Antholz (friend Becky Heavican) of Lincoln; Duane (Vicki) Antholz of Johnson; Nancy (Randy) Rahe of Harbine; grandchildren Chad (Caroline) Dermann, Greg Dermann, Danny (Danielle) Antholz, Carrie (Andy) Buchmeier, Matt (Michaela) Rahe, Andy Rahe; great-grandchildren Lucia, Calvin, Sawyer, Oakley, Taylor, Lane, Brooklyn (and one on the way); brother Robert (Amy) Kuhl of Tecumseh; other relatives and friends. A funeral service will be Wednesday, May 24, 10:30 a.m. at Zion Lutheran Church near Johnson. Burial will follow in the church cemetery. Visitation will be at the funeral home in Auburn Tuesday 9:00 a.m. to 8:00 p.m., with family greeting friends 6:00 to 8:00. Memorials are suggested to Zion Lutheran Church or Dementia Society of America.

The family of Wilma (Kuhl) Antholz created this Life Tributes page to make it easy to share your memories.

Wilma Irene (Kuhl) Antholz, one of four children of Edgar and...

Send flowers to the Antholz family.