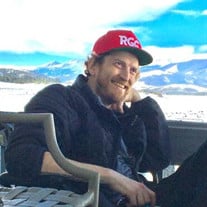 Zachary Ryan VonBergen, one of two children of Jeffery and Annette (Bohling) VonBergen, was born July 13, 1981, in Nebraska City, Nebraska. He was baptized August 30, 1981, at St. Paul (Hickory Grove) Lutheran Church and confirmed at St. John (Stone) Lutheran on April 30, 1995. Zach began his formal education at the Howe School and then attended Peru Elementary through 6th grade. Zach completed school in Auburn Middle and High Schools, graduating in 1999. Most of Zach’s working life was spent as a cook. Other than a short time as a sous-chef at Carlos O’Kelly’s in Bellevue he cooked at various locations in Auburn. As a longtime cook at Dairy Sweet he was known to peek out from the kitchen to wave or say hi to the customers at the counter. When the Dairy Sweet closed, he worked at Café Metro and then ReBucks, where his title included kitchen manager. At all his jobs Zach took pride in the product that left his kitchen and its presentation. While working, Zach was always known to brighten his coworkers’ days with his infectious laugh and exceptional playlists of music that would inevitably be playing once he clocked in. Zach was a man of many interests, first of which was music across many genres. He played guitar, keyboard, and ukulele in addition to singing. He was proud of his tropical fish collection of African Cichlids, enjoyed RC cars and Marvel and DC comics and toys, and had a huge assortment of shoes. A very kind person, many of Zach’s friends’ children referred to him as “Uncle Zach”. He very much liked spending time with his friends and his family. He was also a “thinking” person. He had an amazing memory, loved history, and kept abreast of current politics and world events. Early in 2020 Zach was diagnosed with cancer. From the time he learned of his disease he was determined to live his time left on Earth to the fullest. With the help of his parents, other family, and professional care he was able to remain at his home in Auburn. It was at home on Saturday, July 24, 2021, Zach passed away just 8 days after his 40th birthday. His grandparents Orvall and Edith Bohling and Jean VonBergen, uncle Dennis Bohling, and aunt Nancy Bohling preceded him in death. Zach will be forever remembered fondly by many, including his parents Jeff and Annette VonBergen of Auburn; sister and brother-in-law Katie and Ben Combs of Roca; nephews and niece Trayson, A.J., and Sammy; grandfather Dick VonBergen of Dawson; aunts and uncles Vicki and Bruce Giesecke, Jay and Susi VonBergen, Sharron Randolph, Steve and Nancy Bohling, Leslie Auerbach, Dale and Kathryn Bohling, Joel and Vicki Bohling, Elaine and Lannie Redfern, Tim and Kris Bohling; numerous cousins, other relatives and friends. A memorial service will be Friday, July 30, at 10:30 a.m. at Hemmingsen Funeral Home in Auburn. Visitation will be Thursday 9:00 a.m. to 8:00 p.m., with family greeting friends 6:00 to 8:00. Private family burial of ashes will be later at Wild Rose Cemetery near Dawson. View Zach's service via Livestream at: https://livestream.com/accounts/13846112/events/9774940 Memorials are suggested to Nemaha County Giving Hope Cancer Fund or St. Elizabeth’s Foundation – Cancer Institute.

The family of Zachary Ryan VonBergen created this Life Tributes page to make it easy to share your memories.

Zachary Ryan VonBergen, one of two children of Jeffery and Annette...

Send flowers to the VonBergen family.